5 Types of Circulation In Architecture with Examples 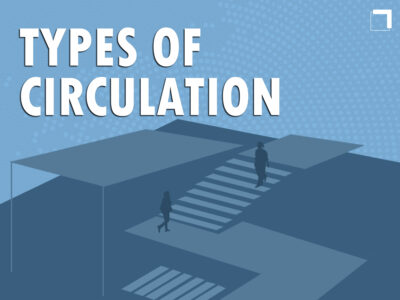 We’ve all probably experienced getting lost in a jumble of staircases and corridors at some point in our lives. And they often leave an anxious and uninviting impression of the building.

Importance of Circulation in Architecture

Circulation plays an important role in our emotions towards the building, be it comfort or security. A building is considered to have good circulation if the progress from where we’ve been to where we are going is subconscious and predictable. In any design process spatial organization and circulation play a crucial part.

The circulation of space is broadly divided into two parts:

Movement of a user in space vertically with increasing difference in level.

Movement of a user in space horizontally with increasing difference in distance.

On a functional basis, circulation can be divided into the following:

It’s the path you take to reach the building.

A simple and straight path that directly leads to the entrance of the building.

Prioritizes the experience of taking the path and can be redirected multiple times before reaching the building.

When you don’t want the entrance to obstruct the view of the building, a symbolic representation of an entrance can be made.

b. Change in Level

A change in height of the plane can establish the idea of entrance into a different space.

Most times, punching a hole in the wall is enough to create an entrance. By penetrating a vertical plane wall, an entrance is created.

Wall opening can be broadly divided into three types:

Surface continuity of the wall is maintained by creating the door thickness equal to that of the wall.

Creates a bolder statement by projecting the entrance to create a transitional space between the exterior and interior.

The exterior space is taken further into the building by creating a depression into the entrance.

3. Configuration of the Path

It is primarily a straight path which then gets intersected and segmented based on the need - linear, curvilinear, segmented, branched, loop, etc.

A single point from which paths are branched out in different directions and lengths.

Originating from a single point, the spiral is a single path that revolves around the point and gradually keeps getting distant from the center.

Two sets of paths - vertical and horizontal, that intersect each other at regular intervals in a grid-like pattern.

Multiple points are connected with paths heading in any direction in space.

A combination of the above mentioned paths in any ratio forms a composite path.

a. Pass By Space

The path is central and the spaces are designed on either side of it.

b. Pass Through Space

The path physically passes through and experiences each space before heading to the next one.

The purpose of the path is to reach a particular space, where it ends.

The path has vertical planes such as walls, doors or windows on both sides of the path.

b. One side open

The path contains an open space on one side such as balcony or gallery.

The path is not blocked by any vertical planar element on either side.

Circulation of a space has just one goal at the end of the day, no matter what type of it we implement in our design. It should be unnoticeable, letting the user experience the building at its best.

For instance, circulation is the invisible side character that enhances a movie without being too loud. And in order to achieve that, it needs to be given utmost importance during the design of a building.

This article covers a fundamental introduction to the types of circulation, as described in the book “Form, Space and Order'' by the author Francis DK Ching. Learn more about the book in the link given below.

11 Factors to Consider While Designing a Landscape - whereisthenorth.com