Why Colour is Important for Designers 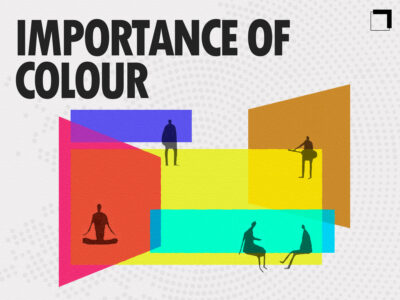 Imagine walking into a swimming pool complex which is painted in shades of red rather than the usual blue. A horrifying image of bodies floating in blood is what comes to mind. Instead of experiencing a relaxing and cool atmosphere, the pool goers might have the cops called on them.

Colours have the ability to influence and even change a space and also the users involved- It can irritate or comfort the eyes, sway moods and cause pleasant or unpleasant responses subconsciously.

Choosing a colour or combination should be done with extreme caution. There are several things to consider before doing so-

Basic knowledge about using colours can be learnt by studying colour theory. It is a set of definitions and guidelines for designers in order to pick good colour combinations. They refer to the color wheel or use the already available extensive knowledge about the effects of colours on human eyes and psychology.

Additionally, there are several other aspects to consider outside the colour theory that also play an important role when it comes to designing spaces.

According to the artist and author Josef Albers, a single colour is never perceived alone, just like how we never perceive a single note in a whole song. The presence of other colours nearby affects how we see the first one. In other words, a colour never appears visually as it is physically supposed to. This ability of one colour being able to influence other colours can be taken advantage of by interior designers to create visually interesting spaces for the users.

When two complementary colours like magenta and green are placed adjacent to each other, both the colours affect each other's hues.

When complementary hues are placed next to each other, a type of optical illusion occurs in which the image continues to appear briefly even after exposure to it has ended, due to a strong contrast and vibrancy. This is referred to as afterimage. For any given color, the eye requires balance from the complementary color and will generate the complement spontaneously if it is not present.

In her book Designing Interiors, author Rosemary Kilmer mentions that the reason surgeons' costumes changed from white to green or blue is to reduce the strain on their eyes due to afterimages. After staring at blood during surgeries for a long time, they would see green spots on the white surfaces. By making most of the surroundings blue or green (contrasting to red) they were able to neutralize the effects of afterimages.

Designers should be aware that the presence of one color in a larger amount can influence the tone and hue of the smaller ones, when placed side by side. Secondly, the stronger the contrast of the backgrounds, the better an object with a bright colour can be made to appear stronger by placing it nearby. The visual illusion of simultaneous contrast can be effectively applied to interior design.

For example, a neutral gray placed against a surrounding red background will appear to have a tinge of green (the complement of red).

Colour even has an effect on how we perceive the size and distance of a space. Spaces with very light, cool colors on the walls generally will appear more spacious, while those with darker and warmer hues appear to be more confined. Darker colours appear less intense when used in larger spaces or at a greater distance. Lighter and cooler hues give the opposite effect.

A room with white or pastel shaded paint appears more light and spacious than the same room with a darker shade- for example, dark green or blue (furniture placements too, remain the same).

There are primarily two popular methods utilized for color distribution-

A chair with a darker chroma placed against a light background will produce a dramatic effect but be less pronounced in contrast than a light-value chair against a dark background.

Different colours mean different things to different people. This mostly has to do with the person's cultural background or the place they are from.

While the colour red denotes something ritualistic in India, it signifies good fortune in China and mourning in South Africa.

Finding good combinations that fulfill all the criterias of the clients and the project is hard. Part of the reason is that colours are not thoroughly studied enough- there is a lot of room for further improvement. There are tens of thousands of colours and yet very less names given to them.

Additionally, theoretical knowledge alone is not sufficient for gaining a good sense of using colours. Just like how reading notes is not going to make one a genius, merely studying theory is not enough. In this particular field, trial and error is the best teacher.

Types of Circulation In Architecture with Examples - whereisthenorth.com

[…] Ways to Implement Color in Architecture […]

[…] Importance of Color in Architecture […]

9 Sustainable Roofing Methods to Apply in Your Building Design - whereisthenorth.com

[…] Colour and Reflectivity Based on Climate […]

[…] How Colour is Important in Architectural Design […]