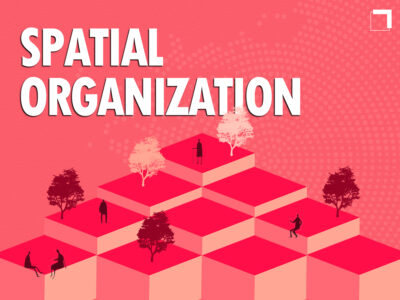 When we begin zoning the spaces to fit the needs and environment of the site, it gets easy to end up with a design with no structure.

Spatial Organization is a way to tie the spaces together to create a collective and organized whole. This can be done both on the micro-level with the floor plan zoning and at the macro level on the site.

For every building, there are specific needs that need to be fulfilled. Spatial organization can aid in problem-solving to come up with effective design solutions.

In the book Form, Space and Order by Francis DK Ching, Spatial Organization has been subdivided based on the fundamentals into 4 different parts.

This is when the design calls for containing smaller-sized spaces within one large space.

A large space can envelop smaller spaces inside the building to promote visual continuity.

The larger space acts as a three-dimensional field for the smaller spaces inside of it.

By orienting the smaller space in the opposite direction to the larger space, the space created becomes dynamic.

By differing the functionality of both spaces, special attention is drawn to a particular space.

This is when two different spaces are placed next to each other and hence share a common boundary.

A plane, either completely or partially covered, that separates both the space helps differentiate the spaces.

b. Row of columns

By choosing to separate the two spaces with the help of columns, not only does it promote visual separation, but also spacial continuity at the same time.

Spatial separation can be achieved for two adjacent spaces through a simple level difference.

This is when two spaces overlap each other to some degree, creating a connection between them both.

The portion that is interlocked can be equally shared by both spaces.

The interlocked spaces can take away from the volume of the existing spaces.

c. Creation of a new space

The interlocked portion can be converted into its own space that helps link both the existing spaces.

4. Spaces Linked by a common space

This is when two spaces rely on an external common space to form a relationship with each other.

The spaces have identical shapes and forms and are linearly arranged.

The linear form itself can be considered as the intermediate space between two distant spaces.

The intermediate space is the largest among the existing spaces and becomes the dominant space.

The spaces resulted from the way in which the existing spaces are arranged and formed.

The central space takes hierarchy, around which other spaces are placed. The circulation is often in the form of radial, loop or spiral.

The plan of the St. Peter’s basilica was centralized with symmetrical spatial arrangements on either side.

A sequence of repetitive spaces is arranged in a linear format and are often alike in form and function.

The arrangement of the residence at this Housing community in Frankfurt are made in a linear fashion with repetitive modules.

The central space is dominant and the rest of the spaces spread out radially from the central axis.

The plan of Auroville was designed with the dominating sphere-like structure at its center with the other buildings and courtyards around it.

Spaces are grouped randomly but with close visual or physical proximity to each other.

The major elements, although repetitive, are different in size and are placed in close proximity. Although the buildings share a common axis and circulation spaces, they are not symmetrical.

Spaces are placed in an ordered structural grid creating a three-dimensional framework. They are often in the form of repetitive modules.

The plan contains long and narrow buildings with varying shapes placed in an irregular, but grid-like manner.

With spatial organization, putting the pieces together to create a completely zoned design is an important step in design zoning.

Attempting multiple modules before settling on one can help us better visualize and improve the space to be designed.

Types of Circulation In Architecture with Examples - whereisthenorth.com

[…] 9 Types of Spatial Organizing Principles to Follow While Designing Spaces […]

[…] 9 Types of Spatial Organization Principles to Follow while Designing Spaces […]

Why Colour is Important for Designers - WTN

[…] 9 Spatial Organization Principles to Follow in Your Design project […]