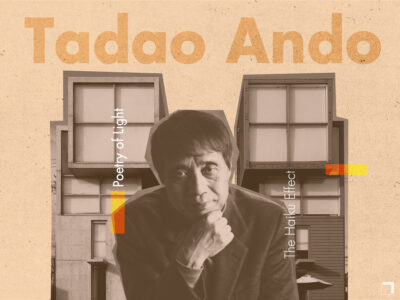 Contemporary architect Tadao Ando was born on 13 September 1941 in Osaka, Japan. Raised by his great-grandmother, he pursued a short career as a boxer and fighter. He then apprenticed with many designers and city planners and learned the art of designing and organizing spaces by visiting local temples, and shrines in Japan and the work of masters like Le Corbusier, Mies van der Rohe, Frank Lloyd Wright and Louis Khan in Europe.

He established his own design studio, Tadao Ando architects and Associates, in Osaka in 1968, as a self-taught architect. He has since built some of the greatest buildings in Japan and around the world which have a distinct minimalist style and extensive use of concrete and light as main elements.

“If you give people nothingness, they can ponder what can be achieved from that nothingness”

With his architectural works, Tadao Ando has successfully created poetry using light, water and wind as materials in his building while staying true to his minimal style with a touch of traditional Japanese architecture and values.