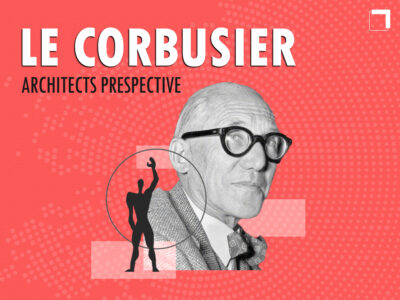 Becoming the pioneer of the modern movement meant changing the way architecture was perceived.

Charles-Edouard Jeanneret-Gris was a Swiss architect fondly known as Le Corbusier in the architecture community. His versatile expertise lies in the areas of architecture, urban planning, sculpting, art and design.

Le Corbusier summarized his style of modern architecture into five points and named them. These were derived as a brief of the methods he uses for his building design.

The 5 Points of Architecture by Le Corbusier are:

Reinforced concrete columns are placed in a grid-like manner and act as a load-bearing structure.

Frame construction replaces the need for load bearing walls. This gives the freedom for the designer to place partition walls in different places on different levels.

3. Free design of the facade

Earlier when facades carried the load of the building, the designer was restrained to using certain types of material and form.

By shifting the load to the interior, the exterior facade can be modified as desired.

When there is no need for load bearing walls, there are no restrictions when it comes to the shape and size of the window openings.

Corbusier’s theory of horizontal windows was based on the derivation that more light can enter into the interior of the building in equal amounts.

The potential of a flat roof in a building can be expanded with the addition of a roof garden.

Corbusier believed that maintaining human scale in architectural design is a necessary practice.

He developed a new system from the golden section and the Fibonacci Sequence known as Le Modular for this purpose.

In Le Corbusier’s book ‘Towards a New Architecture’, translated by John Goodman, he talks about the philosophies that set the foundation to his concept of modern architecture.

Architecture is stifled by custom

Corbusier reiterates that with time, things change, and that we need to change with it.

House is a machine for living

When we consider the true intention of the house, we realise that it is just a machine and we’re living in it.

Unity of construction elements is a guarantee of beauty

The different materials we use for construction need to unify into a beautiful thing. The mortar, asbestos sheet, wood, windows and doors must lead to one another.

Corbusier separated 63 architectural colors based on the moods conveyed by each color. His theory of color psychology features three major principles:

All architects have the responsibility to create a space where everybody can experience a sense of beauty.

(i) Mass: Primary forms are beautiful because they are distinct and hence we can appreciate them.

(iii) Plan: Plan acts as the generator, without which there will be a lack of order and willfulness.

Corbusier believes that understanding the socioeconomic outputs of the decisions we make in architectural design are important.

“If we eliminate from our hearts and minds all dead concepts in regard to the house, and look at the question from a critical and objective point of view, we shall arrive at the “House Machine,” the mass-production house, healthy (and morally so too) and beautiful in the same way that the working tools and instruments which accompany our existence are beautiful. Beautiful also with all the animation that the artist’s sensibility can add to severe and pure functioning elements.”

Use of simple construction methods and materials to produce residential units in large quantities where the interiors can be moulded in accordance to the user.

In Le Corbusier’s book, Towards a New Architecture, as translated by John Goodman, Corbusier expresses that - “The exterior is the result of an interior”

Hadrian's Villa, designed by Le Corbusier is known for its stunning colonnades and exceptional planning.

With the ideation sketches of Hadrian’s Villa, Corbusier explains the emotional significance of our facades and wall openings. He strongly believes that the aim of architecture is to make us feel happy and at peace.

He urges us to have respect for walls that reflect light of different shades. And that these impressions of light extended outside by cylinders (he believes the word column is overused) create a sensorial feeling one cannot achieve by cutting up the walls.

The Chaise Lounge is the iconic furniture designed by Le Corbusier, fondly referred to as a 'relaxing machine'. This highly functional and comfortable furniture was designed to fit the 'machines for living in'.

The design takes shape with the foundation being the golden mean, a proportion inspired by the human body. The Lounge is structured to be an extension of the human limbs adapted to human functions.

The Ronchamp Chapel is a catholic church that was re-built on an existing pilgrimage site. The masonry walls are made thick and curved to improve structural stability, which was supported by hidden columns.

A play of colors is visible in its interiors and the exterior facade is covered with an abstract arrangement of windows.

Modular residential blocks built in the City Fruges in Pessac each had their individual terrace.

Brown, yellow and Jade Green were painted on the facades of the residence to bring a pop of color to the neighborhood.

The brutalist architecture of the Indian museum exhibits exposed brick and concrete work. The building is balanced on Pilotis and the roof is open to the visitors as a recreational space.

The museum comprises three naves with no partition walls for separation.

His aim of creating a small living ecosphere resulted in the ‘street’ corridors, modular flats, and architecture best suited for human scale.

The UN Headquarters was built by a team of 11 architects that included Le Corbusier. Unlike the brutalist style of architecture he is known for, this building is an excellent example of post-war modernist architecture.

Le Corbusier took up the responsibility of town planning for Chandigarh, a city in India. “It was the greatest experience in the contemporary history of planning and architecture”-he stated.

He designed independent neighborhoods and connected them with a huge central boulevard. Other notable features include the piazza, museums and Palaces.

Having worked on designs ranging from all scales and all throughout the world, Corbusier has left his traces in all fields of design and architecture.

Corbusier's work, despite the controversies, stand as an epitome of architectural evolution. His design theories and his bold and original designs stay an inspiration to designers and architects across the world.

5 Important Design Principles and Features of Villa Savoye · the archspace

Is Arcology The Future of Urban Planning? Explained with Examples - whereisthenorth.com