9 Types of Brick Bonds in Architecture 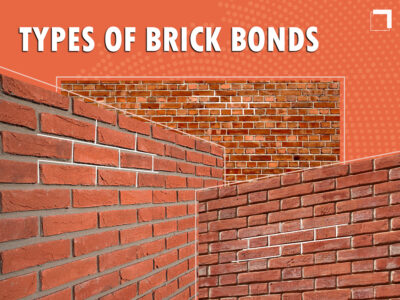 Bricks are one of the most common and popular choices of materials for construction. There are numerous ways in which bricks can be placed and arranged. These arrangements can have functional purposes or simply for aesthetics.

At a basic level, bricks can be placed in three ways:

These placements are arranged in different patterns, which are further classified. The following are the collective types of brick bonds:

English bond is extremely common in India. It is stronger and durable compared to other bonds. One disadvantage is that this bond requires more facing bricks.

The Flemish bond is generally used for garden walls and partitions. This bond is extremely strong and is used where the wall has to be two-brick thick.

Stretcher or running bond is not particularly strong as compared to other bonds. Since it looks good, this bond is usually used on the outer facing walls like boundary or garden walls.

Header bond is similar to stretcher bond. This bond is also used on the outer walls and is not very strong.

Rat trap bond creates a network of bricks where rats can easily be trapped- hence the name.

The Monk Bond is a slight variant of the Flemish bond.

This bond is used for aesthetic purposes more than functional ones.

This bond helps to increase the longitudinal stability of thick walls built in English bonds.

4 Uses of Jali and What Materials to Use - whereisthenorth.com

[…] Brick masonry can be used to prevent flooding, when a layer of asphalt or similar water-proof materials are applied to it.  […]