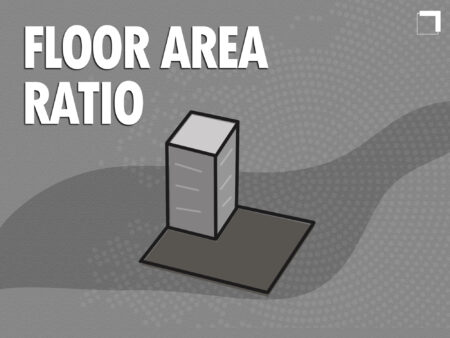 When starting a site analysis, it’s important to look into the local building by-laws of the city or location. The Floor Area Ratio (FAR) differs for each site on the basis of its location, population, road widths, and so on.

The floor area ratio or more commonly, FAR, is the ratio of a building's total floor area to the size of the entire piece of land. In simpler terms, it is the building floor-to-plot area ratio.

FAR determines the total capacity of structure on a piece of land. Depending on the type of land, the structure has a limited capacity of taking its load, and fundamentally, it is not advisable to put additional stress beyond this capacity. Simply, it decides the height of a building and the respective number of floors that will be built in the project. Every municipality and authority allows the construction of a property up to a set FAR which thus, depends on the nature of the land.

FAR can also be considered as the limits imposed on a building's construction. It is also used to determine other measures like floor area, building height, plot coverage, and several other aspects.

It is often used to express the development intensity of the different land uses for the site and integrated into a community’s zoning and other land development controls.

Impact on the surroundings

FAR can be used to either limit the intensity of land use so as to lessen the environmental impacts of development or to control the mass and scale of development.

FAR as a tool

By calculating the rough number of users and vehicles per square foot of building space, FARs can estimate the potential impact the construction will have on the situation. FAR is sometimes used as an analytical tool for projecting the impact of different land use and development intensity scenarios.

The formula for FAR = gross floor area/area of the plot

The buildable part of a plot is the part where construction can legally take place after taking into account all parts of it. Taking measurements of the plot area is one of the first steps in the construction process.

The part of each story above the ground surface, between the exterior walls is measured, prior to any further construction or manipulation.

Total or gross floor area is the sum of the floor area of each of the stories.

Using the formula mentioned above, divide the total floor area by the total buildable area of the plot. The result obtained is the floor area ratio.

Convert the ratio to percentage or index if needed.

FAR is very important for the designers as well as the end-users. The proposed FAR lays the terms and conditions for the construction process. Therefore, it is important to understand how it affects the different groups.

As a person taking up the project for a certain land, it is important to find out FAR because it gives an initial idea about the density, volume, and zoning of the project. Higher FAR means sharing the benefits like lifts, pool, parking, parks, etc. A low FAR means a shorter building and for a high-rise building, FAR has a big impact on its cost. Increasing the value of FAR provides room for further construction or development if permitted.

As per the permissible FAR, the people involved in construction have to get approval for the heights and floor area for their buildings. Hence, higher FAR leads to the vertical expansion of a project. An increase in FAR would help developers with adding extra floors and in meeting the gap of demand and supply in the modern world.

It's important to understand that FAR only decides the height and floor area of a building, not control its layout. Hence, to avoid FAR violations, one should always make sure to inspect the site and its restriction before taking any decision.