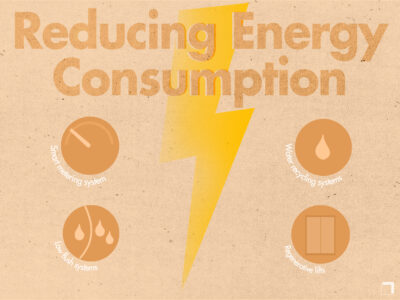 Planting vegetation and building climate responsive structures are important aspects to consider while designing a building which has less impact on the environment. But one other factor we tend to forget is reducing the energy consumption.

If we are able to make the building self sustaining, well and good. If not, due to various environment and economic factors, the best we can do is to try and reduce the amount of energy consumed by the building.

Some technology have already been put into use for this purpose:

A motion sensor is a device which detects movement of people or objects. This device is usually used for security purposes, but in recent years, they are being connected to other devices like lights to switch them on and off based on people's presences.

Sustainable lighting: Motion sensors can be employed to turn on lights and air conditioners only when people use the space.

Sustainable cooling/heating: These devices can also be connected to the building's cooling or heating systems to control their power as well as temperature based on the amount of people using the space.

A rain sensor is a device which is activated by rain. A rain system has openings which open wider when it rains to absorb more water and use it to automatically water vegetation.

Smart watering systems: Rain sensors can be connected to sprinklers or other irrigation systems to automatically collect, store and water vegetation when it rains.

A smart meter is a device which records all kinds of data related to energy consumption like voltage and current levels, usage and power factor.

Responsible use of resources: Smart metering systems store data of the energy consumption down to every single minute. This makes users aware of their utilization and expenses.

Easy and accurate billing: Usually when we pay our bills, we have no idea about the amount of energy we consumed. This aspect is eliminated by using smart monitoring systems.

Drip irrigation system is a system wherein water and nutrients are allowed to drip slowly from pipes directly to the plant's roots or the soil above it.

Prevents erosion: Since water is let to drip down slowly, the top soil layer is not washed away by force.

Low flush system uses much less water than a regular full flush system with the help of a specially designed cistern.

When an elevator goes up with light load and down with heavy load, more energy is produced than used. Regenerative lifts capture this energy rather than letting it go to waste as heat.

Recycling water: Once water is recycled and filtered thoroughly, it can sometimes even be used for drinking.

Reusing water: If the water cannot be pure enough to be used for our daily activities, it can still be stored and used for flushing purposes.

Due to the rising population, energy requirements have increased exponentially. As a result, the rates of these resources skyrocketed. Therefore, reducing the dependency of our design on these resources should take priority.