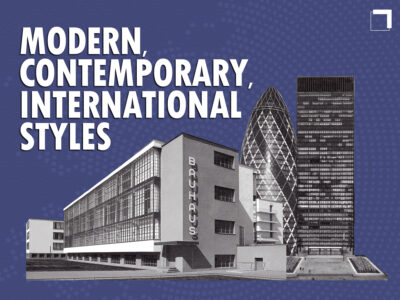 If you’re a part of the architecture and design community, the words "modern", "contemporary"  and "international" would be a frequent sight. But what do they mean? What were their contributions to the field? And how are they different from each other?

Being part of a field that is strongly dependent on communication, it’s important we get the terms right so that we convey the right information at the right time.

By model definition, you might find that both the words modern and contemporary are quite similar. Both represent something of the present or a departure from the traditional styles. Modern style and International style do not differ much in terms of their concepts and goals.

The broad differences between modern, international and contemporary:

In architecture, modern style (or modernist style) refers to the major changes that happened in the field during the early twentieth century to the mid-twentieth century- a movement bent on changing the traditional ornamental design styles to one purely based on function.

It is a broader movement comprising not only the International style but also functionalism, expressionism and several others that differ in their approach from the classical ones followed till then.

Features of the modern movement

The modern movement stays as inspiration to most of the architects simply because of how elegant and efficient the buildings have been. And the buildings designed today, that reflect the ideas of the modern period are considered to be ‘modern’.

The Bauhaus style quickly became one of the most influential aspects of modernism. The elements of architecture embraced by Walter Gropius in the Bauhaus building became precedent to the rest of the buildings that came up.

Architectural characteristics of the Bauhaus building:

International style is a movement slightly different from modernism but closely related to it. The style, which is actually a subset of modern style that Rejected the use of sophisticated ornamentation and bright colors.

The early skyscrapers which came up around the 1920s are a consequence of the International style.

Features of the international style

The international style made architects rethink the idea of architecture and encouraged newer perspectives to designing a space.

The Seagram building designed by Mies Van Der Rohe still stands as one of the most appreciated architectural masterpieces of New York, United States. This 39 floor tall high-rise was a symbol of design and expression in the international era.

Architectural characteristics of the Seagram building:

Contemporary architecture refers to no particular era, rather whatever is the state-of-the-art trend. It mainly focuses on making completely new innovations rather than replicating older styles.

It doesn't refer to any one particular style- it is a collection of various different styles unique to each architect which sometimes look nothing alike. These include buildings that are often considered as "unconventional" and "controversial".

Features of the contemporary style

Simply put, if one day people wake up and decide they prefer living in houses that reflect the design of Middle Age Palaces, that would come under the category of contemporary architecture of that time.

30 St. Mary Axe, popularly known as the Gherkin in London, is an architectural marvel by the Foster + Partners architecture firm. This radial sustainable office tower adorns the London city skyline with its massive and visually impressive structure.

Architectural characteristics of the Gherkin:

To sum it all up:

Modern architecture refers to the period in which the field broke away from the historic styles of being super extra.

Similarly, International is a small part of the Modern style, with similar goals of minimalism and functionalism.

Differently, Contemporary is the latest style as a result of several decades' worth of innovation and designs.

[…] Rewal is a leading Indian Architect known for his smart blend of vernacular and modern architecture. His designs have changed the perspectives and possibilities of […]