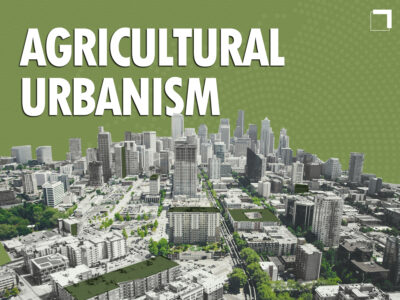 The heart of any city is where a majority of its population lives. Contrarily, outskirts are where the majority of the food for the city's residents is grown. This (literal) gap between the produce and its users has made the latter lose value and appreciation for their food and for the farmers who grow them.

One way to counter the further spread of this problem is agricultural urbanism. As the name suggests, it is the amalgamation of agriculture with urban or city planning.

There is only one goal for agricultural urbanism- merging food production with its consumer's cities. Apart from the areas where food is grown, spaces like farmer's markets, shared gardens, restaurants, shops, and open plazas where produce is sold will also be accommodated.

There are many ways to integrate agriculture into the present cityscape. Given below are a few practical strategies that all cities have the ability to implement to create a greener envelope.

This method involves growing plants on the walls or roofs of houses. The plants use the soil present on the walls and roofs to grow. It is a good way to reduce rainwater runoff and seepage.

Greenhouses require a certain minimum area for their construction. They allow cultivators to comfortably grow crops year-round since it regulates the internal temperature and environment.

This type of farming can be done among the members of the family itself. It is a small-scale initiative that does not require any additional labor or other expenses. Food can be grown and stored in the house itself.

Most cities today are so cramped that most houses don't even have backyard spaces. This is where roof gardens come in- not only can food be produced, but it also keeps the building cool by reducing the amount of heat that is absorbed.

In this type of farming, members of a group of households share the land and effort that is needed for growing food. This leads to a sense of community and also can increase yields by sharing each other's knowledge, resources and experiences.

When there is limited space for growing plants, this method is very effective. Vertical gardening spaces also act as screens that purify the air from dust and pollutants around the building.

This method involves planting greenery wherever possible in the street areas. The community around must look after its growth and survival. It not only purifies the air around and gives produce but also beautifies the cityscape.

Animal husbandry is rearing animals for food or other goods. Although there are limited options while considering the urban environment and climate, raising local species should be no problem. Cattles, bees, fishes, and several species native to the region not only give us produce but also enhance the ecosystem.

There are many benefits to switching to this type of urban planning. One of the obvious reasons is to reduce starvation among the impoverished and vulnerable sections of the community by making healthy food available at affordable rates.

Some of the other benefits of Agricultural Urbanism are listed below:

Brings food back into the city

Gives a sense of community

No need for middle-men

Niravu is a quaint village located in the Kozhikode district of Kerala. It is known to be the first organic village initiated in the state.

When seven residents were diagnosed with cancer caused by the toxic fertilizers, the villagers’ determination to go organic has sprouted into a self-sustaining ecosystem within the village.

Initiatives by the village

Niravu created a bank for native seeds such as pulses, paddy, Vengeri brinjal, etc., that the residents can avail at all times.

The project ‘Urjasree’ promotes the use of LED bulbs and solar panels. And biogas is used as cooking fuel by families.

Project ‘Jaivasree’ ensures one biogas plant for every four households and manure is used for the purpose of farming.

Results of the Initiative:

The sky's the limit for this village that embraces the endless opportunities they have. And their initiatives prove to us that a healthier way of living starts with a single change, beyond which it reciprocates into endless possibilities.

11 Factors to Consider While Designing a Landscape - whereisthenorth.com

9 Sustainable Architecture Practices You Need to Implement in Your Design Project - whereisthenorth.com

[…] 9 Strategies to Integrate Agriculture into Architecture […]

[…] 9 Strategies to Integrate Agriculture with Architecture […]