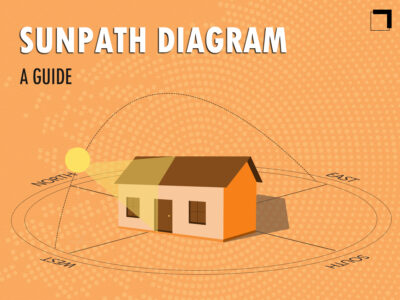 As an architecture student, being able to read sun path diagrams is an absolute necessity. Designing projects for a tropical country, especially like India, considering the angle and path of the sun is extremely important. But at first glance, all we can see is a circle with complicated lines in it. And even if we are able to read the sun path diagram correctly, we might now know exactly what and where to use the information.

Here's a step-by-step guide to reading and using the information provided by a sun path diagram:

How To Read The Sun Path Diagram

The first step in reading a Sun path diagram is to identify the line which represents the month you want to study for your project.

The next step is to identify the time curves.

From this, we can determine both the altitude of the sun and the azimuth angle.

Take the intersection of the months and the time curves. If it intersects the circles of angles which are exactly 10 degrees, 20 degrees, 30 degrees and so on, then well and good. But in the case that it doesn't, which is very likely, you will have to draw your own concentric circle and measure the angle in between the lines (like 26 degrees, 48 degrees etc.).

What can I do with this info?

Now we come to the important part- what exactly is the use of finding the altitude and the Azimuth angle of the Sun?

Websites And Software For Getting Sun Path Diagrams

5 Important Factors to Consider While Developing a Concept For Your Design - whereisthenorth.com

How to Read Psychrometric Chart for Architecture - whereisthenorth.com

[…] How to Read Sun Path Diagrams in Architecture […]

11 Factors to Consider While Designing a Landscape - WTN