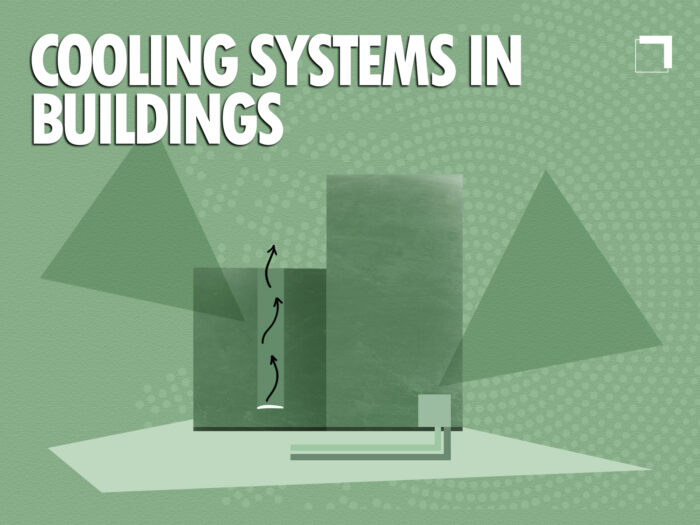 In a country with a hot, humid and dry climate such as India, some form of cooling system is required to be installed in any building design. These systems significantly increase the comfort levels by facilitating heat loss from the building.

Although there are plenty of cooling techniques and technology available in today's world, they are mainly divided into two types:

Passive cooling is a method of building design strategy which helps reduce heat gain with low or no energy consumption. It takes advantage of natural cooling to help maintain comfortable temperature over a long time.

Evaporative cooling uses the concept of evaporation for cooling interior spaces- as water evaporates, it cools the surrounding area by drawing in heat. Since air with lower humidity has a greater capacity to take up the evaporated water vapor, this method works best in climates with low humidity.

Stack effect is caused by the passive air movement throughout the building due to variances in pressure caused by thermal buoyancy, in the vertical direction. If air within a building, which is of lower density, grows warmer than that of the surrounding outdoor air, it rises up.

A fan is an equipment with blades rotated by a motor, which produces constant airflow. By inducing forced convection heat transfer, the air around is cooled. This method is a popular choice due to its low cost and maintenance.

Geothermal heating works by moving a temperature-conducting fluid like water through an underground system of pipes below the building. This allows the fluid to collect the heat and then evenly distribute cool air throughout the building.

Evaporative cooling can also be done as a form of active cooling methods. Although it uses the same method, rates of evaporation can be further increased by increasing air movement using breezes or fans.

A ground source heat pump or a geothermal pump is a cooling system for buildings that uses a heat pump to capture and transfer heat to the ground. This method takes advantage of the almost constant temperature of the earth throughout the year.

There are two main methods of forced or mechanical ventilation systems:

In this system, air is blown through the building using a fan or other similar equipment placed at the openings. This arrangement is used when air pressure in the building is slightly greater than that of the outside environment.

This system allows an influx of fresh air by employing an exhaust fan placed at the outlet of the vent or any other opening. This is done when the air pressure inside the building is slightly lower than outside.

There is also a third method, which is a mix of the above two methods, called a balanced system.

Although it is better to go for passive cooling methods wherever possible, more often than not, the use of active cooling methods can be unavoidable. The priority of every building design should be the comfort of its users and inhabitants. Hence, choosing the right and adequate cooling system for the building is highly important.

4 Uses of Jali and What Materials to Use - whereisthenorth.com

How to Read Psychrometric Chart for Architecture - whereisthenorth.com