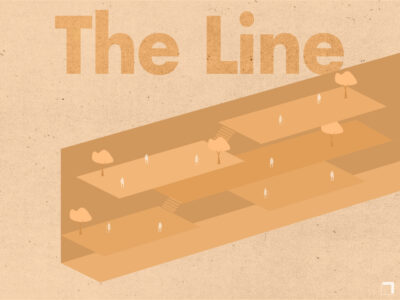 Imagine a utopian world with a heightened living experience, but not at the cost of the surrounding nature. Civilization has completely integrated with Artificial Intelligence technology and our lives progress in a second’s time, while the world’s greatest treasure, nature, is right at our doorstep.

Sounds like it has been taken right off a sci-fi novel, doesn’t it?

Well no, this will soon become reality. At the heart of the trade routes and the country with the fastest growth, is a revolution in urban development.

The Line is a step towards reimagining civilisation and shaping a novel future. A project conceived for the futuristic city of Neom, Saudi Arabia, The Line will bring together sustainability and technology in never before seen ways.

The Line is best described as a “one building city”, and it is precisely that. Residences, commodities, and commercial spaces fit into a singular, linear space with a footprint of just 34 square kilometers.

It makes one ponder how it will be architecturally possible to arrange these spaces, with ample circulation, and greenery without causing chaos.

The Line is also characterized by its pristine location. Being at the center of the world’s trade routes, The Line is strategically placed to facilitate trade and commerce.

This article is just an analysis of The Line based on the promotional advertisements and publications released thus far. However, they accomplish the task of intriguing us.

The information may be limited, and the concept images are all a digital representation of the actual building, but it wouldn’t be right on our part if we didn’t say that they all depict an entrancing and visionary future for all mankind.