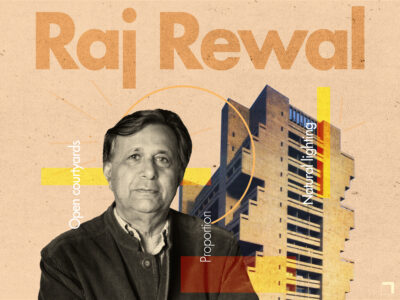 Raj Rewal is a leading Indian Architect known for his smart blend of vernacular and modern architecture. His designs have changed the perspectives and possibilities of architecture.

Raj Rewal’s visualization of unique forms and geometric structures sets him apart from the rest of his colleagues. From being an assistant stage manager in several theatre productions in London to becoming a pioneer architect, it has been quite his creative journey.

Raj Rewal’s signature style of architecture is undoubtedly his juxtaposition of vernacular architecture techniques with a modern twist.

Some recurring architectural features in his buildings are:

Vernacular materials that Raj Rewal used in his buildings:

Rewal strongly believes that all architects must learn about sustainability because the world is going to change quite drastically. All of his projects are curated in such a way that sustainability is given strong emphasis.

Raj Rewal takes ideologies of the past and incorporates the design aspects fit for the future to design his buildings.

Raj Rewal believes that every building has its own spirit or ‘Rasa’. This is formed by the integration of space, hierarchy, structure and sustainability.

The dharma chakra or the wheels, the photovoltaic panels, the play of light and shadow in the internal spaces, all create an ambience at the State University of Performing and Visual Arts in Rohtak that essentially forms its rasa.

A central congregation space in any site is given high emphasis. This encourages the users to socialize and connect, making the space more human-friendly.

The tallest built form in the Jang-E-Azadi memorial museum in Punjab is the Minar, making it the hierarchy of the museum. The other elements of the site were then built around it.

Raj Rewal believes that space is one of the most important aspects of architecture. The courtyards and passages that form the space within the city is often the major element.

Rewal’s works often feature expansive courtyards and well-interconnected circulation paths that are given as much emphasis as the building design itself.

Rhythmic or geometric patterns are designed to provide highly stable structural designs. The structure of the built form becomes the primary theme in almost all of Rewal’s works.

Rewal lays high emphasis on the play of light and shadow, bringing the building come to life.

The structure of the Hall of Nations, New Delhi, was inspired by the perforated Jali. The outer facade was made out of steel frames which gave it a unique identity of its own in the past.

Some standard sustainable practices followed by Rewal are:

-Passive design principles such as:

The Coal India Limited Headquarters in Kolkata has the featured integration of the photovoltaic panels on its sloping and curved features. The panels were not only a sustainable functional feature but were also the primary aesthetic appeal of the building itself.

Raj Rewal’s design sketches were often simple renderings of plans, details, or views. His initial ideation for the building was in the form of simple line drawings that aptly represents his vision.

Raj Rewal is a pioneer in design thinking and innovation through architecture and his versatile projects stand as a testament to that.

His ability to visualize built forms into reality and his belief in Corbusier's idea of creating a modern India has been translated into several of his works that stand the test of time today.