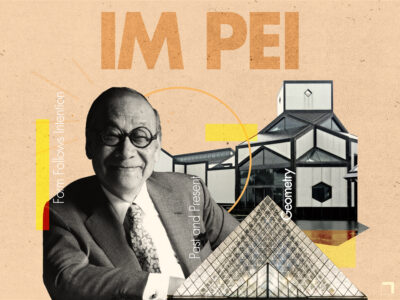 IM Pei is known for his distinctive and bold ideologies. With several controversial designs and a Pritzker prize, he is a revolutionary in the field.

Pei designed a variety of buildings ranging from museums, residences, and offices, with notable mentions being the JFK International Airport, the Rock and Roll Museum and the Bank of China building in Hong Kong.

While we may all be aware of the idea ‘Form Follows Function’ as architecture students, Pei went one step further with his idea, to conceive ‘Form Follows Intention’. In all his designs, he used functional symbols, that while being a part of the structure, are also the elements that tie with the design with its inspiration.

Such elements can be clearly seen in the Rock and Roll Museum. The part of the museum that rests above ground is designed to symbolize a record player.

2) Bridge Between the Old and New

IM Pei was completely against the contest which prevailed between two types of approaches during his time as a designer- past versus present. Through his designs, he was determined to become the bridge between the two instead and also encouraged other architects to do so too. This ideology is implemented in all his buildings, which is what makes them stand the test of time.

The Bank of China tower in Hong Kong is a building with a modern facade and a traditional interior.

A look into Pei’s design process shows the skillful incorporation of his ideologies into practice. The East Building of the National Gallery of Art, Washington D.C. is a center for research and exhibitions of historical art.

Pei's buildings can easily be identified through the use of geometric shapes and of course, pyramids. The clean edges and polygons are in fact, key characteristics of his designs. Pei is skillful in the implementation of his strict ideologies and each of his designs is a clear example of this and speaks of his style loudly.

Some of his famous and controversial buildings are:

The Suzhou Museum is a classic example of bridging the old and new. The museum houses ancient Chinese art, paintings, and handicrafts.

After the Egyptians, there was only one person who made a name and legacy for designing buildings with pyramids. Pei’s life and career display what can be achieved when our ideals and thinking are as strong as our will to persevere through obstacles. His work alone is an example of how modern designs can make lasting impressions.