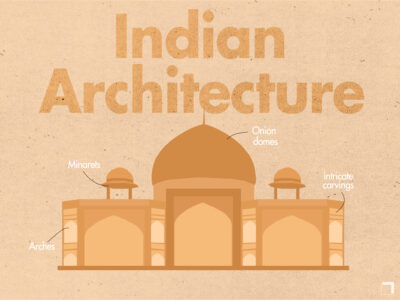 Take note of the rich architectural heritage spread across various time periods and regions in India. Influenced by religion, tradition, geography and other factors - India is known for its vast array of architectural styles.

The practice of carving out natural rock to create structures is most abundant in India’s historical buildings. The required structural elements are retained whereas the interior area is excavated - the excavated rock is put to use in other buildings.

The Kailasa Temple, one of the best-known examples of rock-cut architecture, was excavated from the top and towards the bottom from a single natural rock. It is a marvel today, with detailed carvings and ornamentation on its walls - with a trace of Pallava and Chalukya styles.

This style of architecture originated in Karnataka, a blend of Nagara and Dravidian Styles of Architecture. The Hoysala temples found in Belur and Halebid are some of the best-known examples of this style.

Features of Vesara Architecture include:

Primarily found but not bound to religious structures, sikh buildings also consist of other buildings such as bungas, havelis and samadhas. It is a blend of Mughal and Rajput architecture - noticeable in the contrast of curves and straight lines on its facades.

Broadly classified under the Nagara style of Architecture, Kalinga Architecture is found in Odisha and northern Andhra Pradesh. Usually composed of two parts - a tower (deula) and a hall (jagmohan).

Kalinga Temples are of three types:

Some of these features included:

Features of these buildings included:

It is astonishing to see such diverse styles of architecture throughout different parts of a single country. For a fact, the architectural styles are not limited to the ones mentioned in this article - there are a huge collection of styles to be noted in a country with such branched roots.